Albrecht Dürer is considered one of the greatest creators of old master prints. Like my wife, Albrecht was a native of Nuremberg, Germany where he lived and died from 1471 to 1528. Due to Nuremberg’s love for the artist, today it is still possible to visit Dürer’s restored home and workshop nearly obliterated after World War II.  Around 1500 Dürer became deeply interested in the relationship between mathematics and art. In 1514 he created the copperplate engraving named “Melancholia I” which contained the first magic square published in Europe. Dürer’s Magic Square is depicted below. 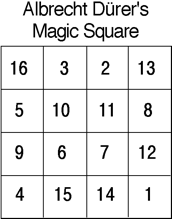 For those unfamiliar in this are of math, a magic square is an arrangement of the numbers from 1 to n^2 (n-squared) in an n-by-n matrix, with each number occurring exactly once, and such that the sum of the entries of any row, any column, or any main diagonal are all equal to the same value. Like many other artifacts of mathematics, magic squares have an intrinsic beauty and elegance that to our good fortune we can translate into the language of the visual arts.

In the tradition of Dürer, I enjoy an intimate interest in mathematics and science. This has led to my exploration of mathematically based creations. The composition presented here also contains a magic square. However, incorporate the magic square in a more subtle way. In this case, instead of the explicitly depicting the magic square I embed the image created by sequentially interconnecting the numbers contained in the square. The basic process is depicted below. 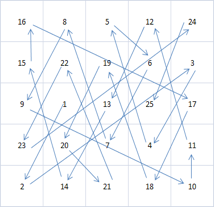 To our surprise, this simple process results in a very interesting geometry with delightful symmetries and harmonies. Taking this basic image as a starting point I then map the points of the Magic square to a PHI harmonic grid and fill the image with my own unique artistic style, and like Magic, you get an artistic composition.